Grab your sword and get ready to battle for some remarkable cash prizes with Troll Hunters video slot from Play’n Go. It’s one exciting game that will take you back to Norse mythology. Released in 2016, this Nordic-themed slot features greatly executed graphics mixed with functional sound effects. Set deep in a bleak mountain, you’ll hear roars, rustles and the hustling wind as you spin the reels.

This online slot machine is played on a 5x5 grid with no betting lines. You have to line up three or more symbols on the grid to cause an explosion and create new, bigger winnings (if you’re lucky enough). Five coin sizes are offered to range from 0.20 to 40.

All symbols are related to the theme such as silver earrings, skull caps, golden rune, a piece of meat, three troll hunters and a Viking.

What makes Troll Hunters unique is its special slot features. The golden rune, which acts as the Wild icon replaces all the other symbols and is paid on its own. New symbols can be made with more wilds. The central icon in any win turns Wild, producing more Wilds to the reels.

Behind the signs, you can see the word “Bonus”. It’s activated once that word is revealed. It starts a white-out allowing you to play around with various signs, which all act as scatters. You’ll receive up to 8 free spins on a various set of reels. Activating 5 of them will result in a win. Landing five or more trolls will activate 5 more spins (max. 20).

Troll Hunters slot is a game that’s amusing and satisfying. It’s a low variance game with an RTP of 96.73% and frequent winnings. Truly, embarking on this adventure will be quite rewarding! 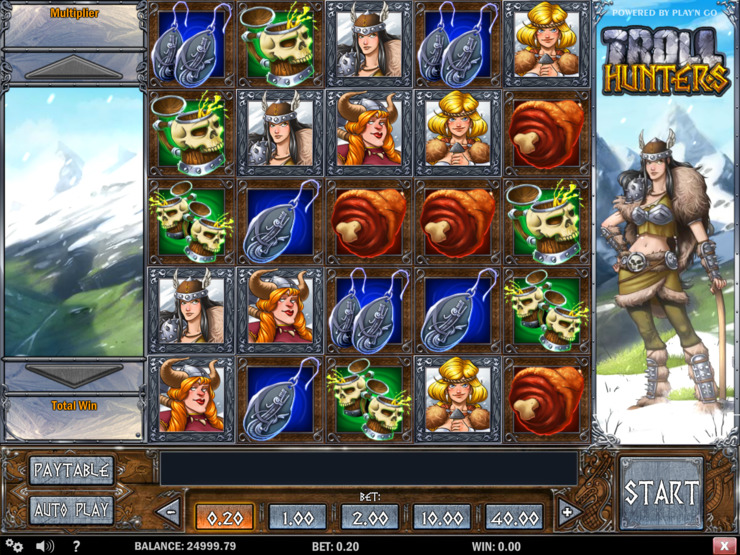