Remember Paul Bunyan and his blue cow, Babe? Timber Jack, Microgaming’s forest-themed five reel, 30 pay line video slot, is a take on the legend about the giant lumberjack and his big blue cow.

The video slot focuses on a rather noble enterprise—logging—as the player encounters a theme set in a forest. Symbols in this slot are from that place as well—there are axes, a chainsaw, Jack himself and his hut, and the Timber Jack Logo. The background doesn’t skimp from making sure you feel like you are walking among a busy forest.

Even the sound effects of the video slot leave you in the forest. As you spin the reels, you’re going to hear random thuds and distant roars, as if there are loggers cutting the forest down. It should also be reminiscent of the humans cutting trees down as in the game WarCraft.

The Scatter and the Wild in this video slot are rather obvious—a mischievous little beaver represents the Wild card for this game. The Scatter, meanwhile, is a saw blade. The Wild card is sometimes a stacked Wild and sometimes a normal one, filling up the reels and creating combinations for you to make easier wins come by.

The beaver isn’t good for just creating combinations with. When you manage to line up three, four, or five beavers, a rather fitting reward is waiting for you.

It’s rather hard to chop down the forest, but it’s certainly easier winning a jackpot in Timber Jack. 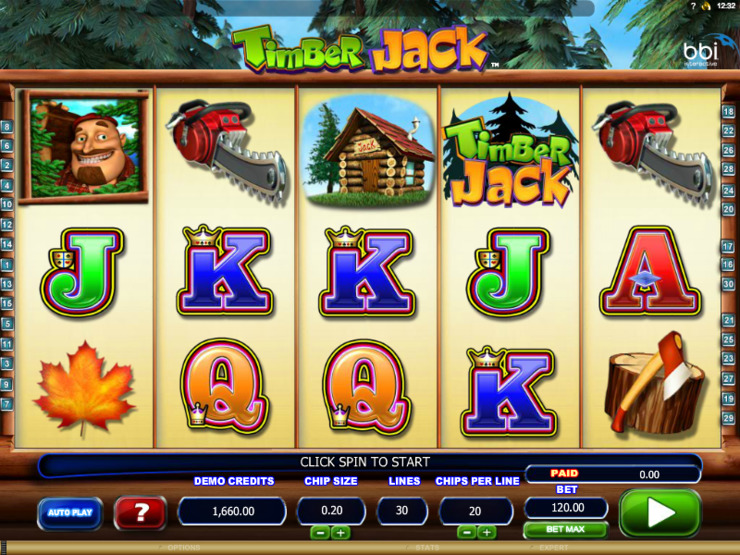