Aye, aye, Captain! Adventure awaits as you embark on a journey to a diverse world with the pirate-themed Jolly Roger video slot machine.

Created by Play N Go, the Jolly Roger slot is a 5-reel and 15-payline slot with a pirate ship backdrop and an outlined craft drifts thru the horizon. Although the Jolly Roger slot doesn’t have the same graphic finesse as compared to other Play N Go titles, its cartoon-ish graphics has its own unique appeal.

All the symbols are pirate-related, consisting of bright and clear cutlasses, a ship, cannon, gold coin, one-eyed pirate, big diamond and red-jeweled ring. Moreover, there are bonus symbols such as pieces of a map, locked chest, parrot scatter and a Jolly Roger pirate flag.

The audio setting is refreshing as the reels play a mechanical sound, creating a ticking noise as they turn and land.

Players get to select a wager from a “coin value”, ranging from 0.01 to 1. Coins adjust the amount of coins betted, Lines pick the number of activated payline, and Max Bet turns reels at the maximum bet. The Auto Play turns the reels for a number of times sans disruption.

A jackpot prize of $10,000 is rewarded once 5 wild cards land on the activated payline.

The Jolly Roger is a nice video slot that has its own appeal. Its mobile version plays well on most devices, even on a slow network. It’s a fun game you can play to pass time. 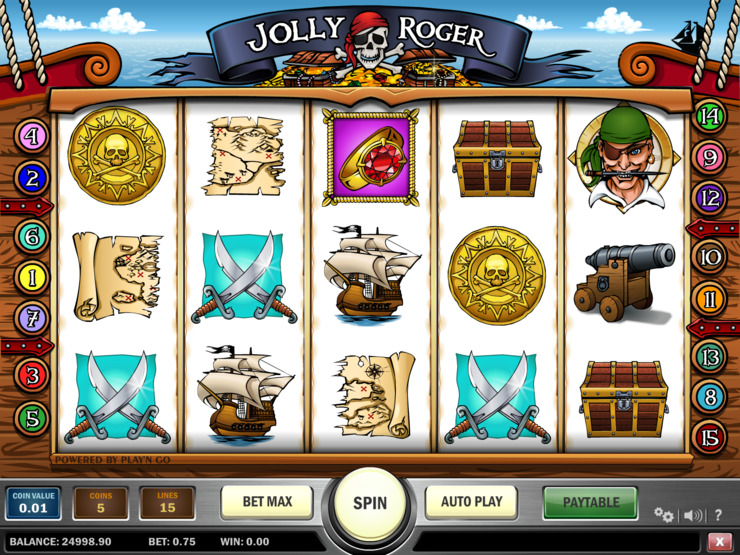