Golden Ticket Slot is one of Play'n'Go’s beautifully crafted video slot games with all the intricate graphic details in place. Centered on a circus theme, Golden Ticket features three characters – the strong mustached man, the circus director, and the sad clown. Other symbols that appear on this online slot game include the iron weights, juggling skittles, and top hats. This Golden Ticket Slot review offers a glimpse on what more to expect when playing this video slot game.

The Golden Ticket is set on a 5x5 grid. Before the game proceeds, a ringmaster sets the mood of the game by giving a warm welcome to the player. The player should then set the bet in the panel situated at the bottom of the reels. As soon as the preferred coin size is selected, the player should click the start button to start the game. An “Autoplay” button is also provided to turn the reels automatically depending on the number of times chosen.

In a Golden Ticket slot, as the start or Autoplay button is activated, the symbols start dropping off and new symbols set in. The general concept of this game is to create a vertical or horizontal line of three to five matching symbols. In the event the symbols land three to five times, the middle symbol changes into a Golden Ticket, thus leading to repeated wins. In this case, the Golden Ticket functions as a Wild, contributing to the formation of new wins. Successive wins will result to a higher multiplier, which is seen at the left side of the screen. When the BONUS word appears, you will then be directed to the bonus game.

The Golden Ticket is a fun and thrilling video slot game. Even if you do not get to the bonus round, the main game itself is already entertaining. Personally, I waited with great anticipation for the multipliers to appear. 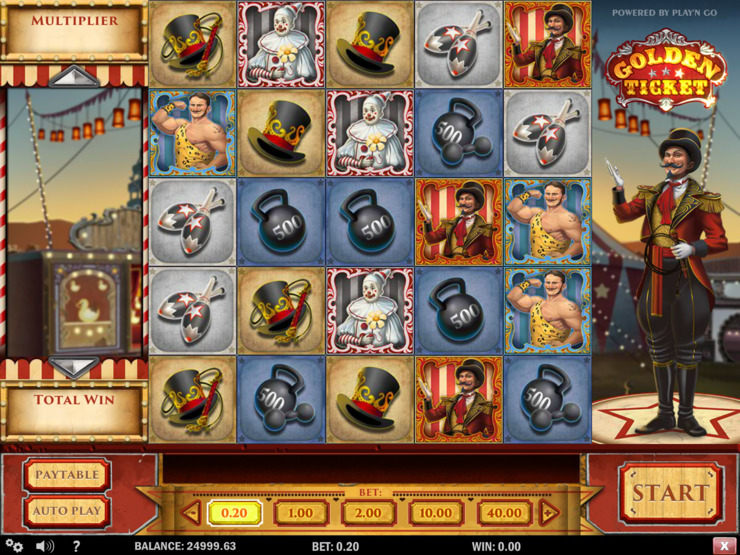