The time of the great Mr. Gatsby was a time when the great American industrialists prospered and money was flowing all around. This is the theme that The Marvelous Mr. Green slot machine is trying to capture—the feeling of overwhelming success, the classic feel of the era, and even the color green—associated with the color of money.

On the technical side, The Marvelous Mr. Green is one of the better online slot machines Net Entertainment has produced. From the time it was launched for the Swedish market in 2008, the popularity of the video slot machine skyrocketed. This is because of the game’s unique elements. The Marvelous Mr. Green features a random multiplier that can increase wins by up to x6, and an even better feature of applying a random multiplier even if the player has yet to spin a winning combination.

Another special feature of the slot machine is that it’s available exclusively at Mr. Green Casino. Aside from the 20-payline video slot, Mr. Green’s Casino Playground offers other popular games from the Net Entertainment stable.

Players have to look out for the Hat symbol and the Mr. Green coin, which are the representation of the Wild card and Scatter bonus reels. Piling up 3 Scatters will award the player Free Spins, while during the Free Spins, spinning a Multiplier symbol increases the Multiplier Meter.

As if in commemoration of the €2,000 jackpot during the August 2014 celebrations involving the game, The Marvelous Mr. Green features a jackpot of 2,000 coins in the instance of a player spinning 5 Gold Brick symbols when on an active payline. 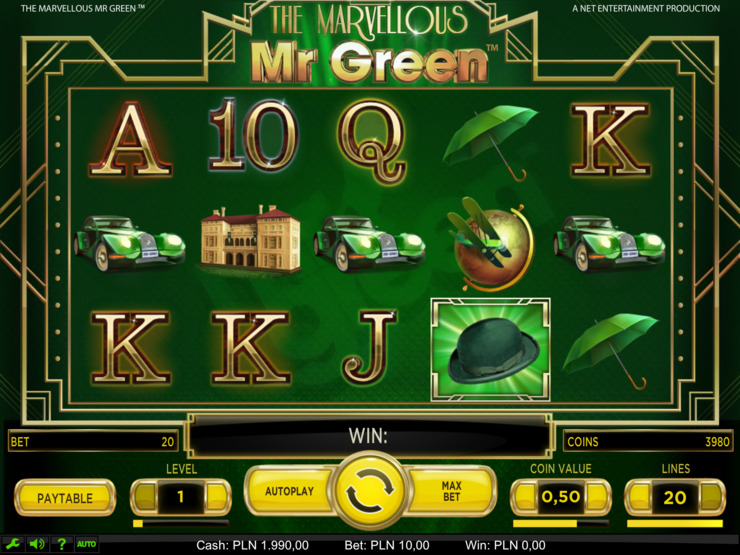