Originally released in 2012, Evolution is a video slot like no other. Produced by Net Entertainment, it features captivating, solid graphics, smooth animation and serene sound effects producing a peaceful ambiance.

A touch of biological history is what you’ll get with its evolution theme as you play this slot starting underwater and moving up on land. The Evolution slot consists of 5-reels and 25-paylines with an average RTP of 96.3%. What sets it apart is its upward spinning motion (not downwards like other slots).

You’ll find yourself in the company of - Draconius rex, Basilisk pluma, Basilisk hairicus, Bestla dentum, Albus slugus and one-celled creatures with the number 10 and letters J, Q, K and A. All symbols are animated which add to the entertainment factor.

Gameplay is suitable for players of all levels of experience. This non-progressive online slot has a basic Wild symbol which appears on reels 2 to 5. It replaces all regular signs.

In this round, the evolution feature upgrades all icons that appear in a winning combo. The icons included in your win will “evolve” to the next level together with any corresponding signs that weren’t part of the winning payline, allowing you to rake serious amounts of cash before you know it.

The Evolution slot is imaginative beyond words. Although it doesn’t have the best pay table, the evolution feature compensates it. Each spin gets more exciting, and if you hit the jackpot, you’ll be glad you’ve tried this game! 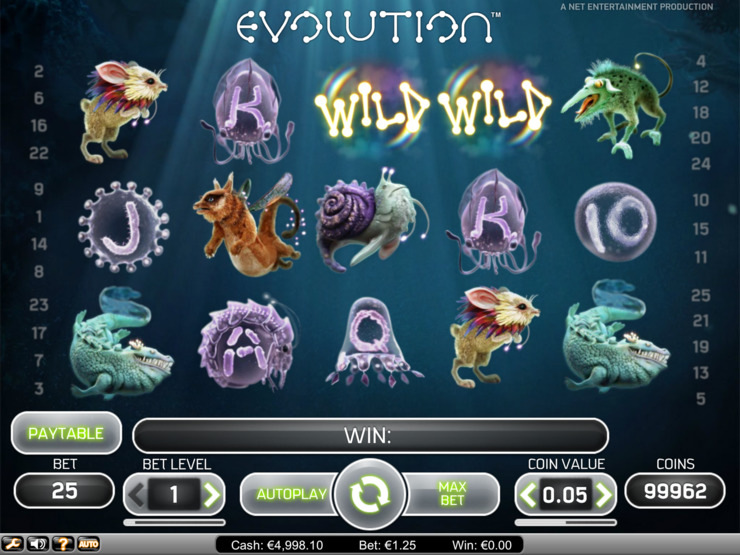