The overwhelming feature of Net Entertainment’s Pyramid: Quest for Immortality is having 720 paylines! The goal is to have matching symbols of at least three from left to right reels.

The general theme of this non-progressive video slot is Egyptian, with pharaoh characters featured as the highest-value payouts. This online slot machine has five reels in the shape of pyramid tombs distinctively designed in 1-3-5-5-5 formation resembling a true pyramid. Instead of spinning reels like other slots, this game animates changing round by falling tomb blocks.

It has an Ankh Wild Symbol which substitutes for all other symbols. Although there is no Scatter for this game, it actuates the Avalanche Feature which increases multiplier of +1 for every three consecutive Avalanche symbols. Random tomb blocks will fall down to build winning combinations. The winning multiplier value can reach up to x10. As bonus, there are hidden treasures and prizes from the pyramid you can find as you play along. You can discover hieroglyphics, golden snakes and eagles, decorated beetles, and leading pharaohs for extra multipliers of up to 50x a winning line.

Pyramid: Quest for Immortality has 10 levels and coin values from 0.01 to 2.0. The highest possible jackpot is 3,600,000 coins. It’s enough inspiration and challenge to unveil the mystery of this slot machine in online casinos. 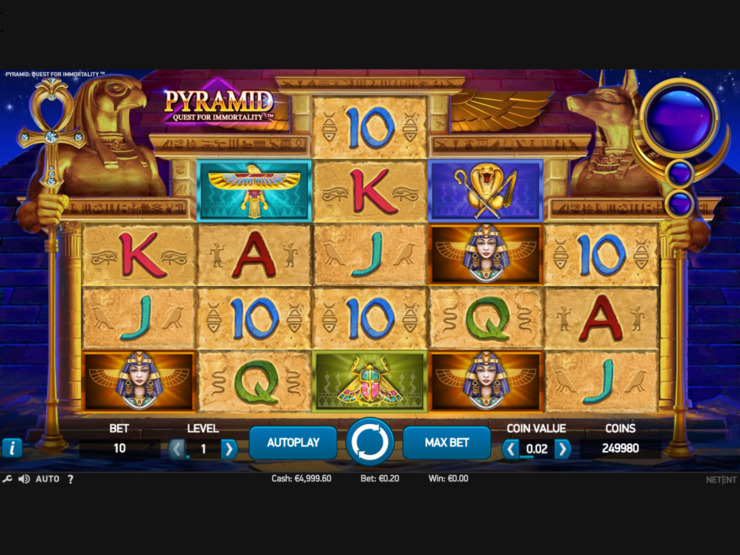