When the first movie of the Aliens franchise came out, chances are that no-one had a clue as to the future success, cult following and spinoff potential. One such example is the highly entertaining 15-payline Aliens video slot by Net Entertainment.

True to the classic movie that spawned the entire franchise, the ‘Aliens’ online slot features symbols that fans of the franchise will recognize immediately. The Wild card symbol is the Weyland-Yutani Corp. logo, the evil corporation that is forever tied to leading the movie franchise’s various heroes and heroines to their impending doom through disastrous missions or exploration.

The game progresses uniquely through three stages: The Search, The Encounter, and The Hive. Ellen Ripley is aided by the player through each of these stages. The first stage, The Search, grants the player a x1 multiplier, where the goal is to raise the Alien Activity meter to maximum. This starts the next stage, aka The Encounter, where players - as evidenced in any Alien game or movie - should conserve ammo, or else, risk being overrun by the Aliens and end up losing the game. The Ammo Clips (ammo symbols) are also important for gaining re-spins (a form of Free Spins) in the game.

Finally, a player must reach The Hive to destroy the Alien Queen before the Aliens reach her to protect. The damage multiplier now ranges from x1 to x10.

Players who are looking for something different to go along with their slot machine experience will find the Aliens slot as two games in one; a gamble on winning, and gambling against time before the Aliens overrun everyone. 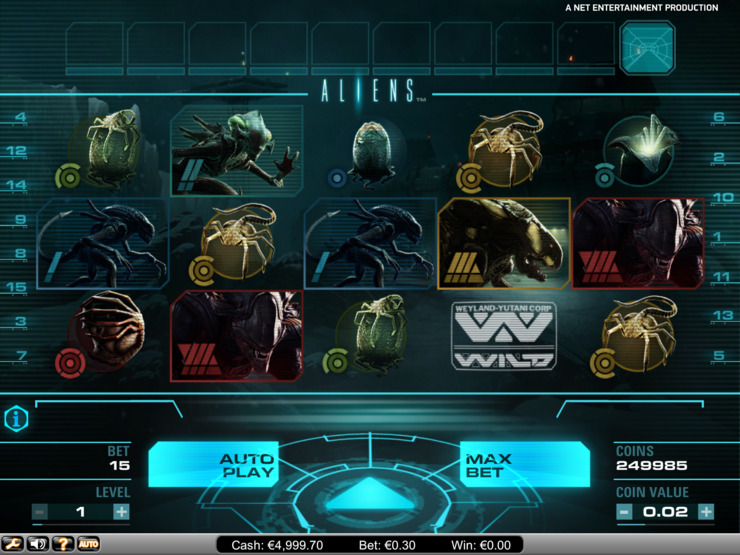