Every video slot machine is a diamond in the rough, but this one is a literal gem. In Microgaming’s video slot, Reel Gems, players are presented an array of different valuable stones to match on the games 5 reels. With 243 ways to win, Reel Gems is a treasure of a video slot.

In this game, players are always given the reel (real) deal. The Reel Gems symbol is the wild which substitutes for all the symbols in the game except for the scatter, and this symbol only appears on reels 2, and 4.

Diamonds are a girl’s best friend, but in this video slot, the diamond is everyone’s best friend. The diamond ring is the game’s scatter symbol. Getting 3 or more activates the free spin bonus feature. Players are given 15 total free spins with a multiplier of 3x! Additionally, players can re-trigger a free spin by getting more scatters during this bonus round. The extra spins will be added to the total amount of free spins.

There is one extra feature in this video slot, and that is the free re-spin option. Below the reels are buttons marked “re-spin” and players can press this to reset the reel they want. The other reels will remain in place granting a surefire combo when used correctly. Players can press the re-spin however many times they want, but they will only be rewarded for each new winning combo on an active payline.

The Reel Gems video slot is a real treat for both the eyes and the wallet. It has enough sparkling stones you could look at, and rewards guaranteed to keep you playing for hours. 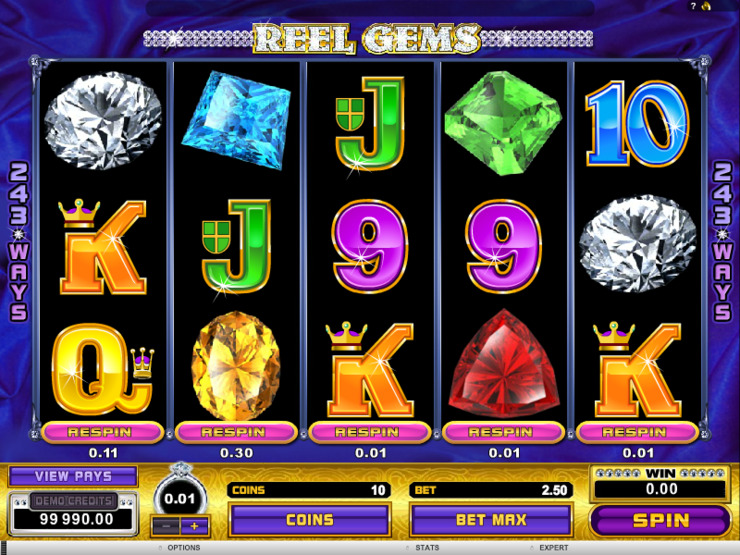