From the looks of this slot, the Hades here isn’t the serious, doom-and-gloom death god we’re all familiar with. Hades in Hot as Hades, Microgaming’s five-reel, 20 pay-line slot, is more like the Hades in Percy Jackson—a rock star with an almost childish temperament.

It is a cartooned slot, but there is nothing cartoon-ey about the prizes, as well as the 20 pay lines. The game puts you on a quest to take on Hades and his minions as you try to find the Crystal Helm and take it back to its rightful owners. You’ll encounter Scatters, Wilds, Quest Bonuses and Super Modes along the way.

There are other prizes to be had as well. Players would want to brush up their Greek history, and look for these icons:

The Wild card is the game’s logo and can replace all other symbols except the scatter, which is a Helmet Symbol. A team of Wilds also awards 5,000c. The goal is to find the Crystal Helm and leave the Underworld. The key to this is spinning Cerberus in each of the four levels then completing the level in Zeus’ Chamber.

Will you be leaving Hades’ chamber in one piece, or will you go home with your quest failed? Either way, you’re going to have fun surely winning in this slot. 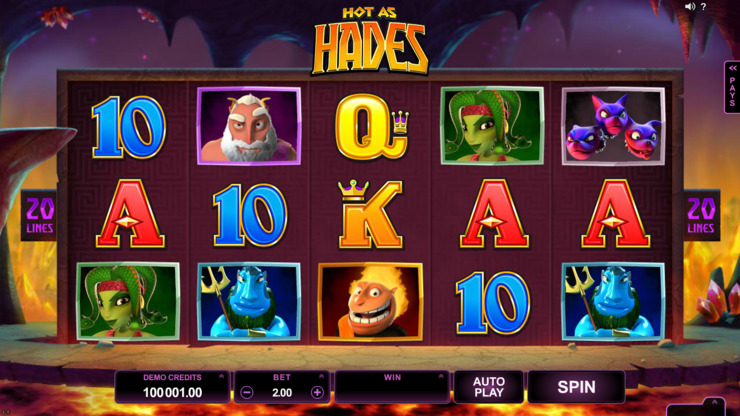