Wouldn’t it be nice to play a game where the graphics are as beautiful as the title character? Developer Whow Games doesn’t disappoint in that end with Golden Princess, a 25-pay line online video slot.

The title Golden Princess doesn’t seem to allude to just the main character, which is a Princess waiting for her Prince to come whisk her away—this video slot features beautiful landscapes, a thoroughly picturesque mountain background, as well as lakes, hills and mountains skillfully made. Of course, the reels are still the focus of the slot, but it’s hard to ignore all the beauty.

Even as you spin with the soothing background music, pay attention to the symbols, which are what clearly takes the Princess’ fancy:

The Princess isn’t just some decoration on the reels, as well. She is the game’s Wild multiplier, which can randomly reward you with a times-two or times–three multiplier. The Scatter, meanwhile, is a Treasure symbol. A random multiplier is awarded during the Free Spin rounds if you manage to spin two or three treasure chests.

Will a fairy-tale romance be in the making for you, or will you fail to glimpse the Princess? Either way, beautiful jackpots are waiting for you in Golden Princess. 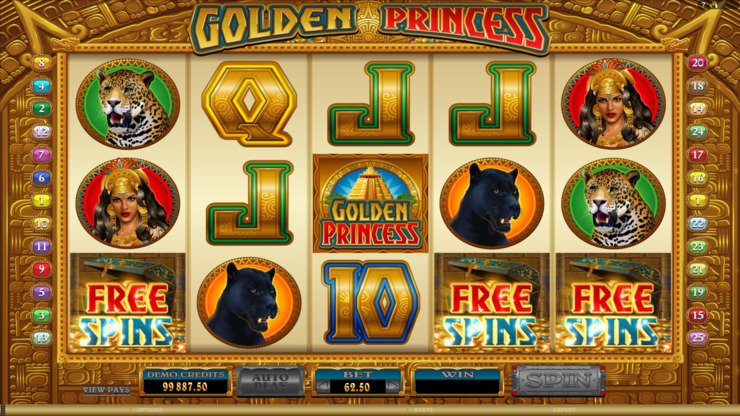