The Golden Age in Hollywood was a time when Katherine Hepburn, Cary Grant, and Elizabeth Taylor, along with a lot of other classic movie actors and actresses, took to the silver screen. Golden Era, a five-reel, 15-pay line video slot from Microgaming software, aims to take you back to those simpler, more elegant times in movies.

The reels take a turn hosting the movie reels in this slot. Symbols in cinema, such as Film Reels, Hollywood Walk of Fame stars, Classical cars of the time and rival Movie Stars populate the reels. There’s also an air of elegance in the reels—the movie stars, a male and a female, wear a top hat and tux and a diamond necklace and fur, respectively.

As to what really these symbols weigh in value, they are as follows:

Aside from those symbols, you should also remember the Wild and the Scatter symbols. The Wild card is the Golden Era logo while the Scatter symbol is the Clapperboard. The wild replaces other symbols on the reel while the scatter triggers 12 free spins including an Embracing Wild Reel feature, where the symbols on reel one and five are activated to cover the whole reel during free spins.

Golden Era brings people back to a classier time. Winning on the reels is easier when you have eye candy to look at. 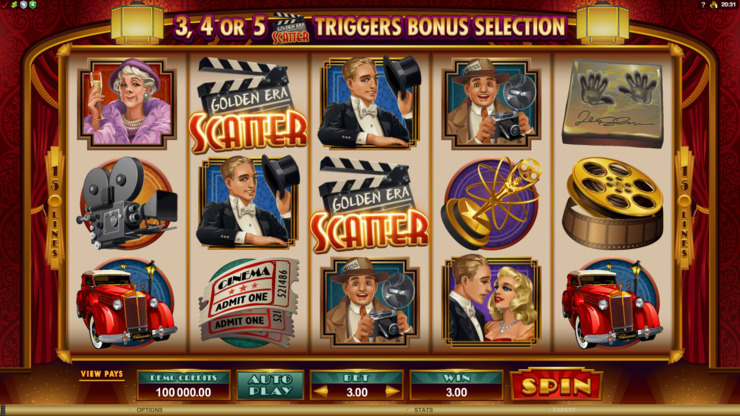