Two Alice in Wonderland movies have brought the whimsy of different Wonderland characters back to pop culture. The Playtech-developed Forest of Wonders, a 25-pay line, five-reel slot, brings that whimsical adventure right to the video slots.

Prepare to follow the path Alice treaded as you spin the reels in this game. The icons all follow the popular tale—from the Mad Hatter, to the card soldiers. Even the Queen resembles the Queen of Hearts while the King appears less capable than her. Absalom is a green caterpillar, while the March Hare waits for his turn to pour tea.

In this game, the Sleeping Mouse and the White Rabbit takes the form of the Wild card and the Scatter icon, respectively. The Wild Sleeping Mouse replaces any symbol on the reels to complete combinations. Five of them that line up, meanwhile, pay out a staggering pot of 5,000 coins. The White Rabbit, meanwhile, will give out 15 Free Spins. That usually depend on how many of them are on the reels—15 for three, with more corresponding for four or five.

There is a bonus symbol in this game in the form of mushrooms. Three or more of these will trigger a bonus round, where you get to choose from five mushrooms for cash prizes of random amounts. You only get three chances at getting a substantial jackpot.

With prizes and bonuses galore, it is worth following the Rabbit down the rabbit hole into the Forest of Wonders! 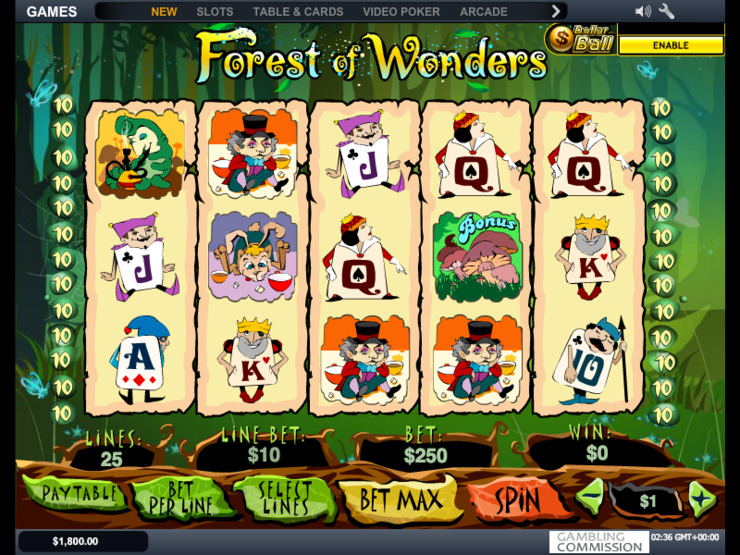