If you want to win in football but suck in real life, you can win it all with Football Star. Microgaming Software's football-themed online video slot features 5-reels and is filled with elements from the Football World Cup to stimulate the senses.

Football and high stakes goes hand-in-hand with each other and it’s even better in the form of a video slot. This game was released back in 2014 to coincide with and now commemorate the FIFA World Cup that year. This slot also gives players the chance to walk away with substantial wins with its return-to-player average at around 96 or 97%.

The Scatter and Wild is replaced here by Rolling Reels, Striking Wilds, and Stacked Wilds. The gameplay is familiar—spin the reels and hit any winning combination. Spinning the Striking Wild, however, will give the player a chance at Wilds that turns into a win.

Microgaming’s signature Free Spin bonus round also comes with this slot. Hit three Scatters, and 15 free spins are given to the player. Four spins gets 20, while five nets 25. Keep hitting these, and you’re well on your way to hitting more winning combinations and stacking your coins.

Football Star is great for people still hanging on to their vuvuzelas and pining for the mad thrill of the World Cup. If you’re in it for the wins, though, you’re guaranteed to get at least a shot of taking home something similar to a football player’s weekly wage. 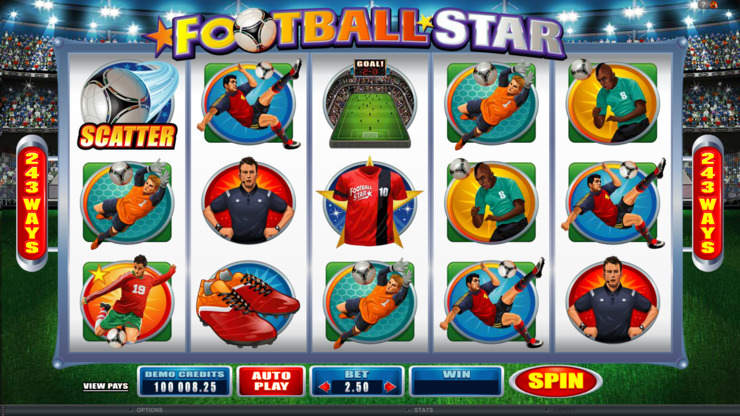