The emperor seeks your presence at his palace and orders you to meditate with him under the trees and just relax by the koi pond and listen to nature’s song. In Microgaming’s 5 reel 25 payline video slot, Emperor’s Garden, players are invited to the royal temple by order of the emperor to indulge in all his splendors.

Tranquility is the garden’s center of focus and in this video slot, players will find their chi opened as they line up matching pairs of symbols to win. These symbols include a pagoda, a pink lily, a dragon statue and of course, the emperor himself. All of these can be found in the garden, which is also the game’s wild symbol that only appears on reels 2, 3 and 4. When the garden appears, it expands to fill up an entire reel giving players more chances to win and be enlightened.

Watch how the koi’s swim serenely in their pond and be rewarded with free spins. In the Emperor’s Garden, the koi’s are the game’s scatter symbol and getting 3 or more activates the game’s free spin bonus which gives players a multiplier of 3x on their wins.

If that’s not enough, the emperor is a gambling man, and you can gamble with him to increase your wins. Pressing the gamble button underneath the reels take players to a window where they guess the color or suit of a face down card. Guessing the color right doubles the win, and guessing the suit right quadruples the payout. Players can advance to five rounds of this feature, however, losing a round means losing all the wins entirely.

Overall, Emperor’s Garden video slot is a relaxing video slot to play if you’re in the mood for a calm game with plenty of wins. 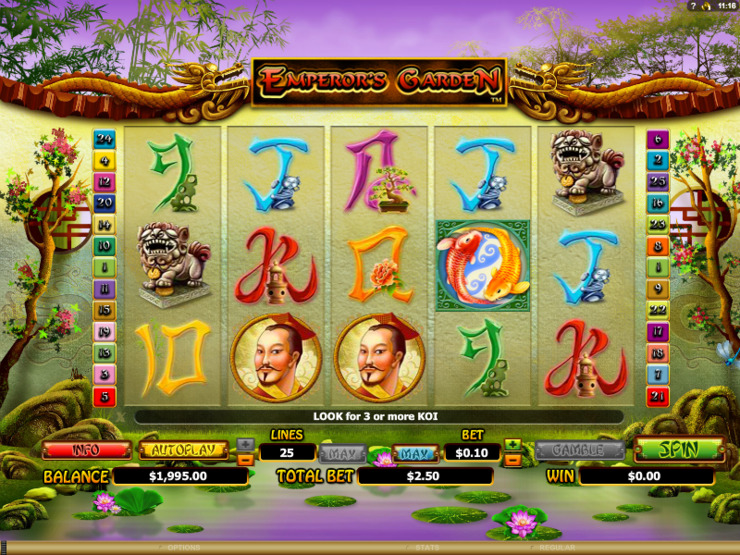