Emperor of the Sea Online Slot

Richness abound in the Emperor of the Sea slot from Microgaming software. Released in 2016, an epic journey in pursuit of fortune is what this Asian-themed video slot is all about. Set during the period of ancient China that’s well executed with its beautiful and colorful graphics, oriental music which calms the senses and fast gameplay.

Emperor of the Sea has 5-reels and 88-paylines with an ocean backdrop. You can set your wager by selecting a coin value which ranges from 0.01 to 0.05. Cartoon-like symbols can be found such as a Koi carp, dragon, pot of gold, ship, tortoise and the usual 9, 10, J, Q, K, and A.

The Wild symbol is represented by the Emperor of the Sea logo which replaces all regular symbols. It will appear stacked during the main game and free spins feature.

The Scatter icon is a gold ingot. Get 3 or more of this icon to receive 8 free spins. During this round, you’ll be presented with two extra features:

Emperor of the Sea Slot Review - The Verdict

The Emperor of the Sea slot has a non-progressive jackpot that will keep you spinning for hours until you find your own seafaring treasure. Sail through the vast ocean and you might get lucky in amassing a grand fortune.

Emperor of the Sea 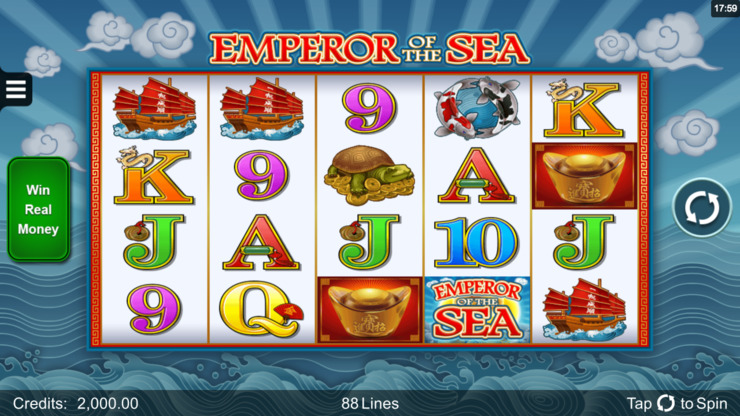