There are a lot of sports-themed slots available to play with, but Cricket Star, a five-reel video slot from Microgaming software, is unique. Aside from being a cricket-themed slot, the online slot also replaces the usual card deck symbols with players.

The symbols in Cricket Star should be familiar with people who follow the World Cricket scene. You will come across famous Cricket players, some of which belong to countries active in the Cricket World Cup. There are also other features to look out for, such as stacked Wilds, Wild Wickets, as well as Rolling Reels.

The symbol for the Wild is the Cricket Star icon, which replaces all other game symbols aside from the Scatter, making for easier winning combinations. Meanwhile, the Scatter image is a White Cricket Ball. This triggers 15, 20, or 25 free spins depending on how many symbols will appear on the reels. It is also the biggest value-symbol, worth up to 12,500c.

Teams from New Zealand, Pakistan, West Indies and England make an appearance in this online slot. Cricket Star makes you feel like a star on the field and in the slots at the same time. 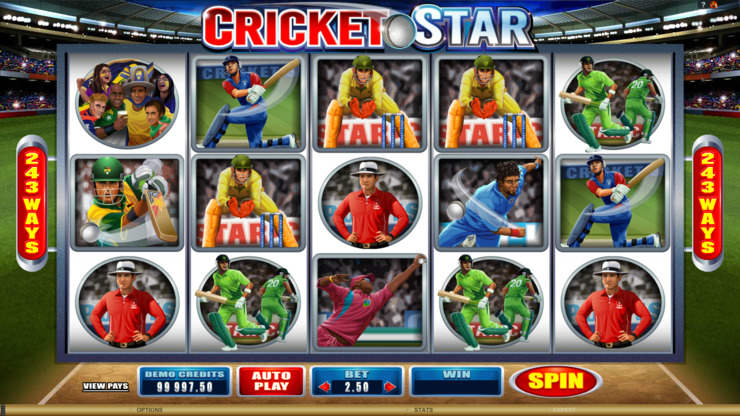