There have been reports of mysterious flying saucers hovering about. No one believed this until one day, one of them landed. Their ship opens and inside is an alien playing Microgaming’s Cosmic Invaders, and he’s inviting you to play the game. The fate of the world is in your hands. Score big on this 5 reeled 30 pay-line video slot, and the world might just be safe.

They have landed. In this video slot, players need to pair up matching symbols that range from aliens, planets, flying saucers to satellites. Sometimes another alien ship lands to help the human race. A green alien is the game’s wild symbol that substitutes for all the symbols except for the scatter and bonus symbol. If the green alien lands on reels 2, 3, and 4, the spaceship will beam that reel and turn it into an expanding wild granting more wins.

The purple alien acts as the games scatter, and getting 3, 4 or 5 gives players 6, 7, or 8 free spins respectively. But also be mindful of the UFO signs on reels 1 and 5, as getting 3 or more of this activates the alien picking bonus wherein players have to choose aliens to give you a prize. Players can keep on choosing an alien until there are none left of if they get the wrong one. The alien picking bonus can also be triggered during free spins.

The entirety of the human race is counting on you to stop the Cosmic Invaders by winning in this video slot by Microgaming. 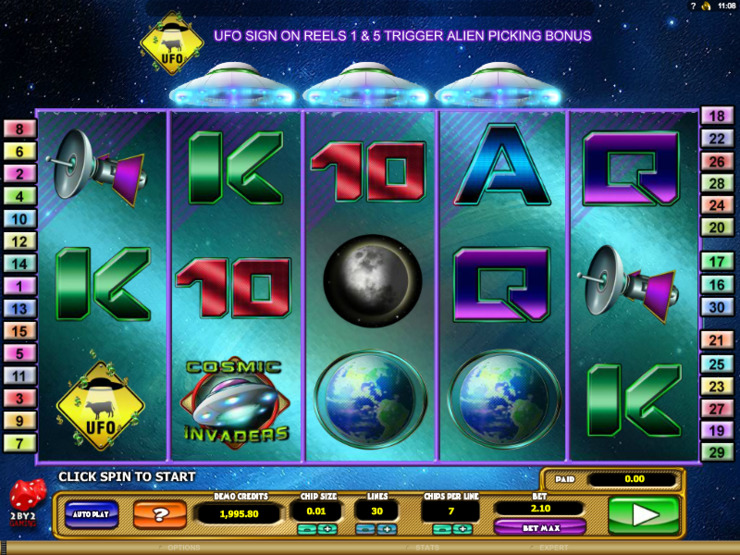