Do you have what it takes to break the Bank? That is a famous line from the movie Ocean’s Thirteen, but in Bust the Bank, your intent should be on coming home with a huge gain from the bank.

Microgaming has created quite the reputation for mixing role-playing and video slots together, and Bust the Bank is another one of their famous role-playing video slots. The 243-pay line slot place you in the shoes of a daring thief as you find ways to take home the money without getting caught.

Getting caught is a certainty in the icons you’re going to play with. Done in a cartoonish style, two robbers—your accomplices, perhaps—share the reels with other icons such as a police dog chasing down a busted burglar and a tough looking policeman. A nice added touch to the reel is the symbol coming to life whenever a combination is rolled.

Bust the Bank also features a Wild card and a Scatter icon. The Wild card is the game logo, which is a stacked Wild as well. The Scatter, meanwhile, is a ticking Bomb, which is perfect as, instead of awarding spins, it explodes to create Free Spins for you.

Busting a bank wouldn’t be complete without smashing a Piggy Bank, which, if spun on the third reel, will award you with money. It awards a random prize—very few coins for the unfortunate and a jackpot of thousands for the lucky.

Bust the Bank brings a refreshing take to heist-themed video slots. After all, isn’t that what you’re regularly doing—every win is basically busting the bank? 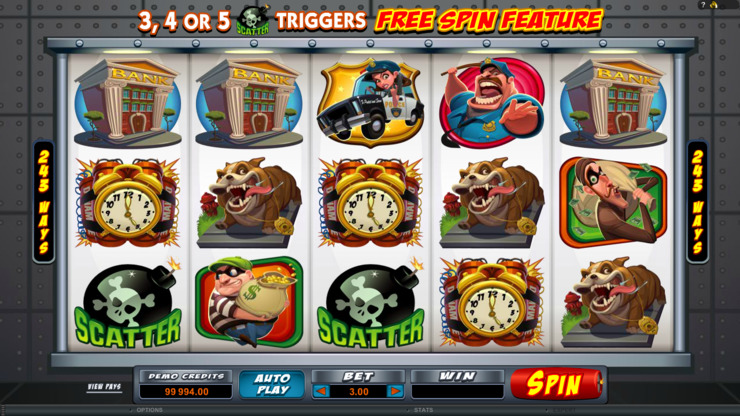