The cops are on the lookout for a male suspect wanted for robbery and in Microgaming’s video slot, it’s your job to help him. Burglin’ Bob is at it again, and now the cops are looking for him. Help Bob runaway in the sewers and help him find more stores to rob. Burglin’ Bob is a 5 reeled 30 pay-line video slot wherein you help a burglar rob stores and you get to keep all the profits.

Players are equipped with various items to help in a successful heist. These items include a flashlight and some keys, a padlock and of course, the main man himself, Bob. Matching these items on an active pay-line will reward players with coins. Bob’s dog also helps out, as he is the game’s wild symbol that substitutes for every symbol in the game except for the bonus and scatter.

The alarm is the game’s scatter, and landing one on reels 2, 3, and 4 rewards players with free spins that have a multiplier of x2 and this free spin bonus can also be re-triggered.

The meats of the game are the bonus features. The manhole symbol activates this. Getting 3 or more takes you down the sewer systems where players pick from the icons displayed on screen and finding three matching amounts will be the prize you get. Additionally, if you find 3 Bobs hiding under the manhole, you will trigger the smash ‘n’ grab bonus in which you raid four shops where you grab prizes from each. Another bonus is the safe bonus which activates when 3 or more safes on an active pay-line. When triggered, players get the chance to pick a safe to get a cash prize. 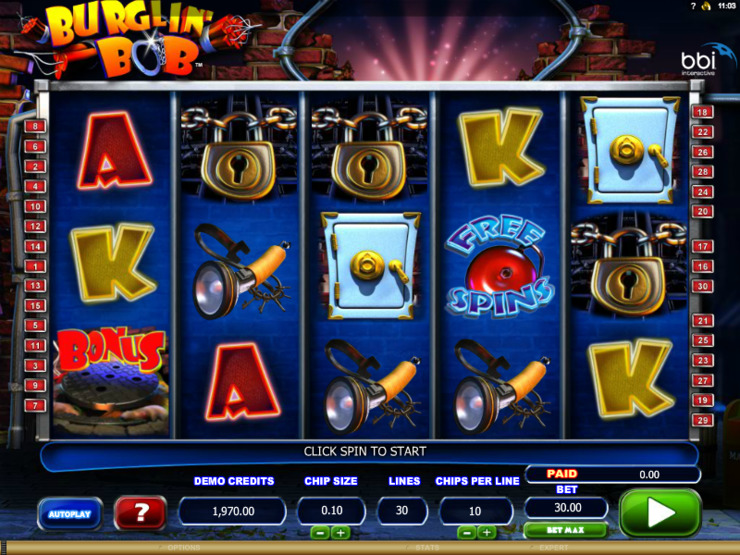