Aside from the fact that Boom Brothers uses tools and metals as its symbols, what makes it hardcore is its video and audio effects. It’s very amusing to watch matching combinations move and animate with precious stones and explosives. The cracking metal and chain sounds adds up to its inviting graphics. Released by Net Entertainment on 2010, Boom Brothers is a 20-payline, 5-reel online video slot game inspired in an underground mining setting. It offers exciting features that will surely invite you to roll that reel!

Activate Railtrack and quadruple your win by having three of its symbols align and complete on reels 1 to 3. The game will then proceed to a Bonus feature where there will be three dwarves riding their own carts. The player will select a crate that will dictate the movement of the dwarves until they reach the prize at the end of the tunnel. The first dwarf to reach its prize will be gathered by the player. No worries if initially the Railtrack is incomplete because there is still a chance for 3x and 2x multipliers.

Moreover, if there are three or more Free Spin symbols the player will collect the summation of free spins from the equivalent value of each icon which could be at most 50 which will also automatically have 3x multiplier.

Another unique and cool feature of this online slot is Second Chance where a dwarf will change a symbol by bombing it and giving you another gamble for a winning combination. The engaging part of it is how the dwarf uses jetpacks to go around the screen and explosives to alter the symbols.

Boom Brothers is a must-try slot machine. It’s fun on the eyes and easy to understand. 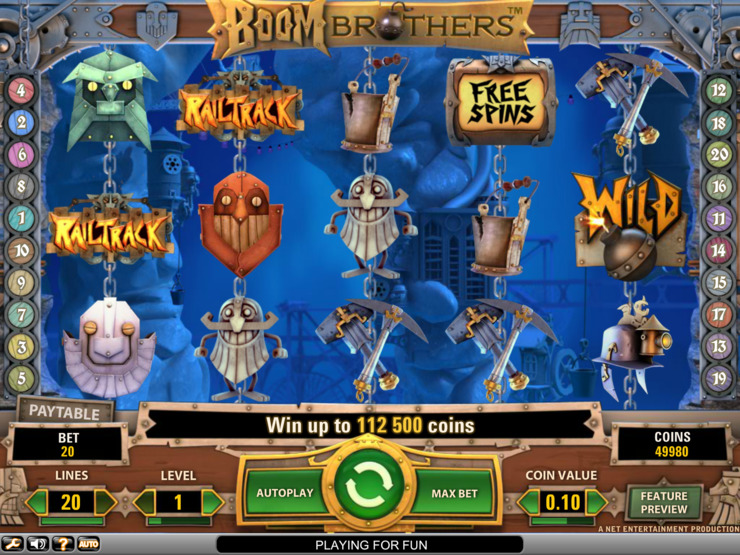