Microgaming based the creation of the 108 Heroes Slot game on the classic Chinese novel by Shi Nai’an by Shui Hu Zhan about 108 rebels with a Robin Hood attitude of protecting and providing the poor with treasures of gold from their infamous robberies.

The graphic designers of this slot game gave life to the legendary novel by making sure that Chinese armors costumes and sounds are well depicted in the slot machine. Players that love ethnic Chinese themes are sure to enjoy making their bets in this Playtech creation which is available only on desktop devices at the moment. We are still waiting for updates if it is soon to be released on mobile or tablets for on the go players.

108 Heroes is a video slot game with 5 reels and 15 paylines. For a bigger chance of winning more, you have to bet with a higher amount. Players can set their wagers between the minimum amounts of 0.01 to 10 per payline which means that the bet that you can make per spin is from $0.05 to $150.

Like many Microgaming slots, this game features many exciting features such as Wild Symbols, Scatter Symbols, Free Spins, and Bonus Features. The game logo is the Wild symbols which can appear anywhere and anytime on the reels. To activate the Free Spin feature, more than 2 purple and green scatter symbols should pop anywhere in the reels. The free spins will give way to times 15 of the winnings that are completed. 108 Heores has the King’s Treasure Bonus feature where a bonus game is activated when 3 chest symbols pops up at the same time. An Auto Play tab is also available to allow players to set the number of spins automatically. 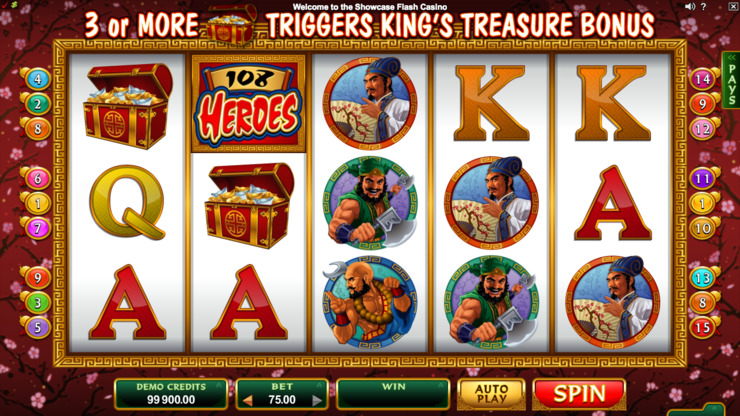